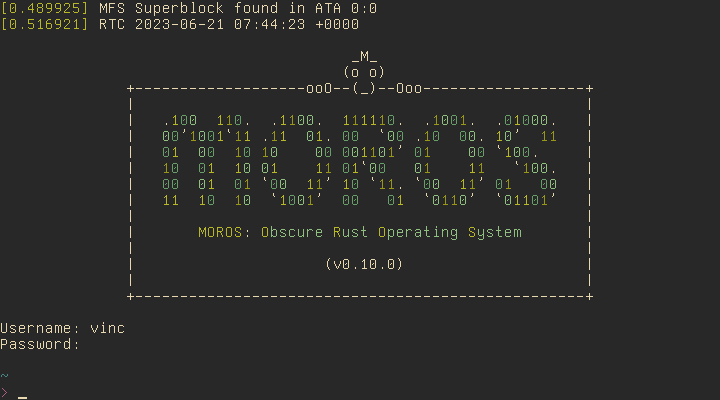 MOROS is a hobby operating system written in Rust by Vincent Ollivier.

It targets computers with a x86-64 architecture and a BIOS, so mostly from 2005 to 2020, but it also runs well on most emulators (Bochs, QEMU, and VirtualBox).

This project started from the seventh post of the second edition of Writing an OS in Rust by Philipp Oppermann and by reading the OSDev wiki along with many open source kernels.

Install the required tools with make setup or the following commands:

Build the image to disk.img:

Run natively on a x86 computer by copying the bootloader and the kernel to a hard drive or USB stick (but there is currently no USB driver so the filesystem will not be available in that case):

MOROS will open a console in diskless mode after boot if no filesystem is detected. The following command will setup the filesystem on a hard drive, allowing you to exit the diskless mode and log in as a normal user:

Be careful not to overwrite the hard drive of your OS when using dd inside your OS, and install or disk format inside MOROS if you don't use an emulator.

Run the test suite in QEMU:

MOROS is released under MIT.